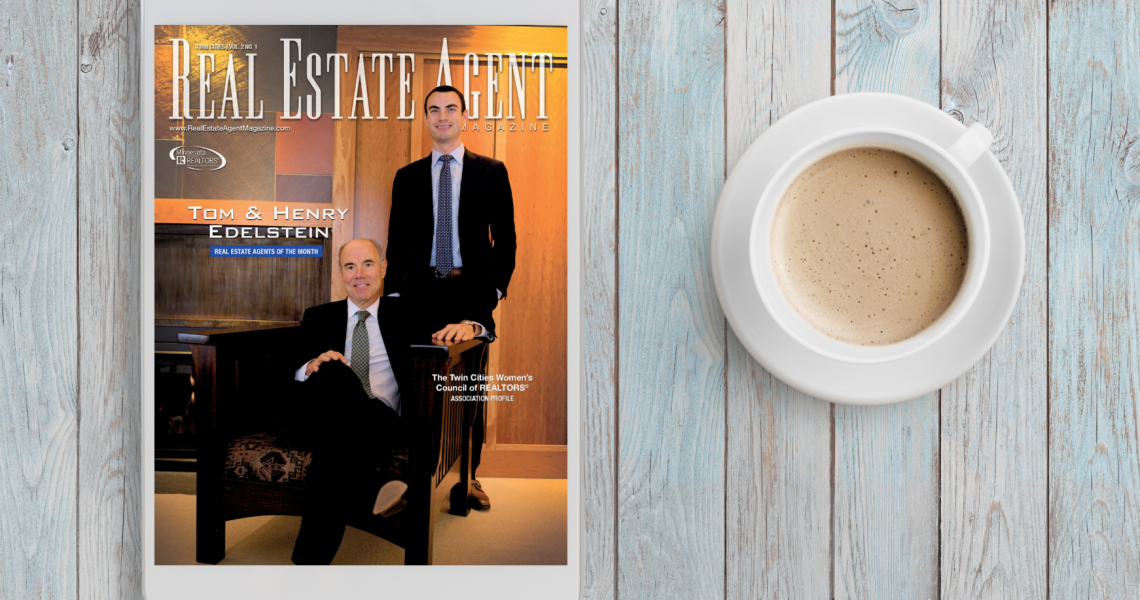 Whether metaphorically, as with his initial stride into the world of real estate, or literally, on daily walks with wife, Randy, Tom Edelstein’s life journey is one which he savors with humble gratitude and appreciation. Now heading up one of Minnesota’s strongest and most successful real estate teams at Coldwell Banker Burnet in St. Paul, he looks back on a career that spans more than four decades.

“Life truly is an amazing journey,” Tom says quietly, his eyes scanning the St. Paul office, pausing briefly on each of the faces of those who make up Team Edelstein. “I wouldn’t have thought when I was 21 that I’d be sitting here talking to you today about a 40- year real estate career.”

A graduate of the Len and Ray Jambor School of Real Estate in 1974, Tom eagerly embraced their philosophy, gleaning industry knowledge and fine-tuning his own ideology along the way.

“I was particularly impressed by one marketing tool that was not only clever, but reflected their father’s favorite Polish adage: ‘Troche Wiecej’ which translated means, ‘A little bit extra, a little bit more’,” says Tom. “They custom designed yardsticks that actually measured four-feet and were inscribed with, For a Full Measure of Satisfaction Plus – ‘Troche Wiecej.’ These were so unique and popular that nearly 40 years later you’ll still see them around!”

Over the years, Tom continued to grow and evolve right along with the Jambors. In 1979, they purchased a franchise and became Realty World Jambor; 10 years later they expanded their brand becoming Coldwell Banker Jambor; and finally, in 1999 were bought out, and became Coldwell Banker Burnet. Throughout the changes, Tom’s business continued to grow and thrive, but he says, the final evolution precipitated a veritable growth explosion for him and his team.

“It was a good move,” Tom asserts. “Coldwell Banker Burnet embraces the same type of customer service philosophy so it was a merge with like-minded people.”

Going the extra mile wasn’t all that Tom gleaned from his years with Jambor Realty. Theirs was a family business and similarly, soon Tom would welcome his son, Henry, and wife, Randy, into what had up until then been his private domain.

Henry, always energetic and resourceful like his father, got his first “real job” at the age of 16 but it wasn’t until he was 18 that he got his first taste of the real estate business.

“It was the summer before leaving for college,” Henry explains. “There was a vacant property that Dad had listed and a friend and I would serve as greeters every weekend during the open house. Even though all we could do was help set up and basically greet visitors, I found it very interesting. I think it was the first time I fully appreciated the complexity of my dad’s business.”

So interesting in fact, that upon completing his freshman year at Lynn University in Florida, Henry returned to Minnesota to get his real estate license.

“I worked summers with Tom and Team Edelstein, and then in 2010 he took me to Las Vegas on a work trip – and to celebrate my 21st birthday,” Henry says. “We attended the CRS conference. That was a turning point for me helping me decide to make real estate my full-time career. It was fascinating to hear from top REALTORS from across the country. It was a wonderful and enlightening experience.”

In the ensuing years, Henry completed several internships in the business and upon graduating with a degree in business administration with an emphasis in management he eagerly joined Team Edelstein.

“Henry has always been a worker bee,” interjects Tom with obvious pride. “Not only does he have tremendous energy and enthusiasm, but he brings so many innovative ideas. I think we complement one another very well, blending the experience and culture of baby boomers with the techsavvy, high-energy millennial style.

“I have to say,” he adds, “My greatest pleasure at the end of the day is being able to work side-by-side with my son.”

The feeling is obviously mutual.

“The two things that drive me most is the joy of knowing I’m really helping families and, of course, working alongside my dad. Not everyone can do that, but we’ve not only managed, I believe our already great relationship has thrived,” says Henry.

Attending CRS was just the beginning for the younger Edelstein whose quest for knowledge is never-ending. He continues, like his father, to read voraciously and attends numerous conferences and seminars. Most recently he participated in the INMAN Real Estate Connect in New York and the CRS Sell-A-Bration in California.

“I subscribe to J. Williamson’s philosophy that ‘School is never out for the professional,’” says Henry. “Currently I’m reading, ‘Take the Stairs: 7 Steps to Achieving True Success’ by Rory Vaden. In order to be successful you have to remain humble with a mindset that you have to keep learning and evolving.”

Father and son frequently work as a team, initially both meeting with the prospective homebuyer or seller.

“Typically we will meet with our clients together with the purpose of building a relationship, it’s not just about buying or selling,” notes Tom. “Relationships and sincerely caring about doing what’s best for your client is the only way we operate. Once you put people first, everything else seems to fall into place.”

“Tom is a very strong listing agent,” Henry adds. “We work in tandem very effectively. For example, he might list a home and then I work with those same clients in their search for another house to purchase. I’ve learned from the best that success isn’t measured in closings but in happy people and my father has repeat business four generations deep to attest to this.”

While daughter Elisa, a recent honors graduate from Eckerd College in Florida, is making her mark on the world exploring and supporting sustainable farming, the remaining member of the Edelstein family, Randy, has joined her husband and son at the office.

“My wife joined Team Edelstein about seven years ago and handles all the bookkeeping, both business and personal. I guarantee, she either spends or knows where every penny I make goes,” Tom says with a good natured chuckle.

“It’s been wonderful having Randy here every day,” he continues. “One of the benefits of her being part of the team is that she now has a better understanding of what I do all day and the complexities of the business.”

Team Edelstein has been growing since the late ’70s when Tom hired his first assistant. Now, eight members strong, each brings their own unique style and expertise. As marketing coordinator, Merri Solstad has been part of the team for 20 years excelling in attention to detail and customer service. Scott Lanahan, also a 20-year veteran brings a strong skill set and particular talent for negotiating. Joe Uebel joined the team right out of college and has been with them for 12 years. He’s described as having exceptional patience and remarkable people skills. Erin Niedorf and Gretchen Doerfler have both been with the team for 10 years. As the transactions coordinator, Niedorf makes certain the process runs smoothly and is able to pitch in as needed with other office duties. Doerfler, like Uebel, joined the team immediately out of college and wears many hats. A proficient property manager she’s also quite adept working with buyers and sellers.

“I’ve been successful because I’m surrounded by a truly great team that makes me look good,” says Tom. “We are like a family, sharing the same belief that success is not measured by the number of closings we have, but rather, the people we help and the relationships we’ve built. A journey of ten thousand miles may start with one step, but a happy, successful life’s journey is chronicled by the people you touch and friendships you make along the way.”