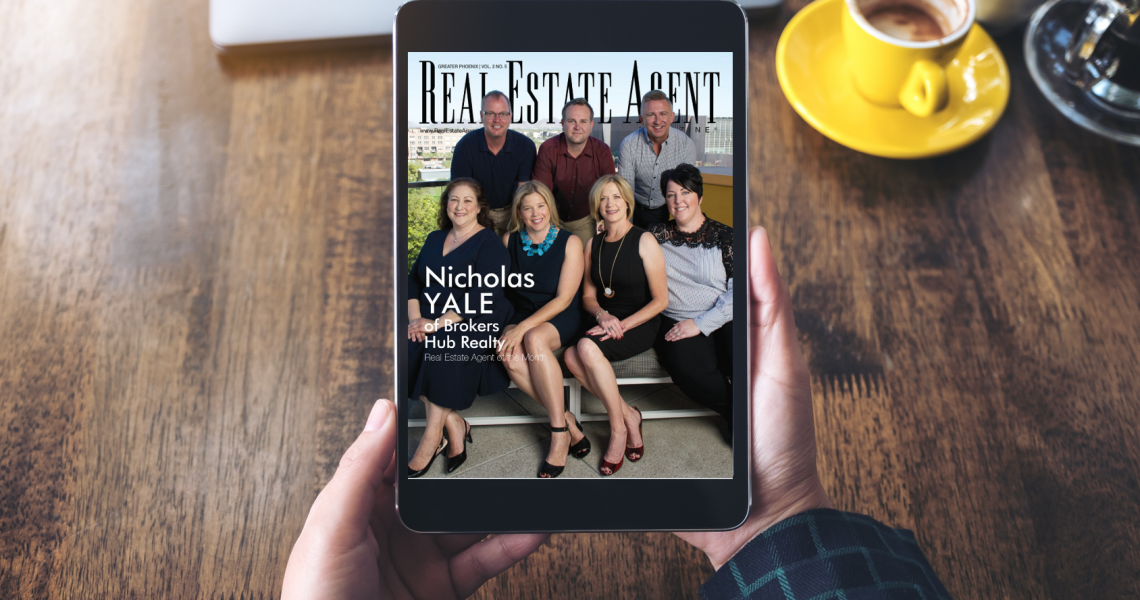 “I’ve always joked that the root word in broker is ‘broke,’ and consequently have never had the desire to be a broker or owner of a company,” says Nicholas Yale. “However, one day I was looking over my books, evaluating the core values of my business and came to the realization that there was something in our industry that was missing: a brokerage where quality agents flocked to be a part of, with both the industry and the public recognizing it as such. I want to encourage excellence in agents, help elevate the industry, and create a company where agents aspire to be. I wanted to be a catalyst for change in the industry I loved and then it hit me, if I was to ever open my own brokerage, our tagline needed to be: Elevating the Standard™.”

That was the beginning of a revolutionary new concept, partnership and brokerage. Together with seven other co-founders, longtime and accomplished real estate agents like himself, Yale recently launched Brokers Hub Realty.

The vision for this new real estate firm comes from the co-founders’ commitment to higher standards, knowledgeable service and hiring only proven leaders within the real estate community. Yale put it best when he said, “I was with a fantastic company for more than 15 years where the founder, back in 1965, saw the value and importance of a experienced agent within a quality company. That was what attracted me to the company initially, and I really wanted to honor that core value and vision.” The co-founders discussed, ‘What could we do that would separate agents from the rest of the 65,000 agents out there?’ After much discussion, they determined that one of the core standards they would set for the new endeavor would be that every agent in the company would acquire their broker’s license.

By requiring this (not so) simple rule, all of the agents at Brokers Hub Realty are associate brokers. With this as a starting point, by definition every agent with the company is at least three years in the business. A common theme in those initial brokerage planning meetings was that they want to elevate brokers and let the public know that yes, there is a difference between someone who has reached a certain status and a newbie. We might all go to the same appointments, ask the same fees, but we are not all created equal, some have put in the time and energy in taking their careers to a higher level of expertise.

In addition to the condition of acquiring a broker’s license, the founders also came up with a few other parameters for would-be Brokers Hub Realty agents.

“We want to be the company where every single agent, by definition, is a fantastic agent,” says Laryn Callaway, one of the co-founders. So they set up a production standard to continue this theme, and as a result, Brokers Hub Realty associates must to do a minimum of 12 transactions a year. They felt that with the industry average being four homes a year, that’s not really serving and protecting the public because if you’re only doing four or five transactions a year, you’re probably not up to date on all the finer points of a transaction. They also wanted a fee structure that would keep the brokerage from being ‘broke’ but still have fees that would allow the associate brokers to be able to invest back into their business and not the pockets of the owners of the company. Yale says, “I think we found that perfect balance.”

Jenn Jenkins, another of the co-founders, talked about what Brokers Hub Realty would be offering these crème de la crème agents. “I know when I was being courted by companies, they were offering me things like paying for my signage, website or postcards, but I don’t need or want that! As an already successful producing agent, I already had my systems in place. What I wanted, and what we believe matters to the truly successful agent, is a good brand with an excellent reputation of agents and then get out of the way and let us sell!”

If it sounds as though Yale has quite a lot of experience in this industry, it’s because he has. Drawn to real estate after watching his own father’s success, first in Phoenix and then in Texas, Yale still recalls the setting when he shared his plans with his father.

“My dad was a Houston luxury agent, and I was going to school in Phoenix,” he explains. “It was spring break, I went to visit my dad and we were lying by the pool having a margarita, when the inevitable ‘what are you going to do with your life’ conversation ensued. I looked around and said, ‘I think I want to go into real estate.’ But, he was quick to point out how tough and volatile it could be. I just looked around and said, ‘it’s Wednesday, and we’re sitting by the pool having a margarita how tough can it be?”

Of course, as most young men learn at one point or another, his father was right. Real estate can be a challenging and unpredictable career. But Yale had made up his mind, and set out to prove to both his father and himself, that he could make it.

“If I had to do it all over again, I’m not sure I would,” he admits candidly. “It’s a lot harder than it looked lying by the pool that day.” Nearly 20 years later, he’s not only built a solid career, stellar reputation, and tremendous following, but Yale has now moved the goal post forward to create his own ideal of what a good brokerage firm should be.

Joining Yale in this exciting endeavor are veteran and stellar real estate agents: Sarah O’Campo, Jenn Jenkins, Christian Stallman, Chris F. Campbell, Polly Mitchell, Laryn Callaway and Lindsay Erickson. You might say these top professionals represent the “hub” of Brokers Hub Realty, joining forces, ideas and sharing a dream that agents are only limited by their own goals and abilities.

“We’ve done the research, but more importantly, we’ve experienced this business that we all love,” says Yale. “We didn’t create this company to feed our egos. Quite simply, looking around, there just wasn’t another company that offered the appeal we were looking for, so we created it ourselves.”

Where the company sees for growth projections is quite clear. They want to attract high producing, experienced agents who care about the industry and the legacy they leave behind, likeminded agents who will help be the catalysts for Elevating the Standard™ of what it means to be a real estate agent.

“It’s going to be a slow burn to grow,” says Yale, “because we’re very picky. As we should be.”