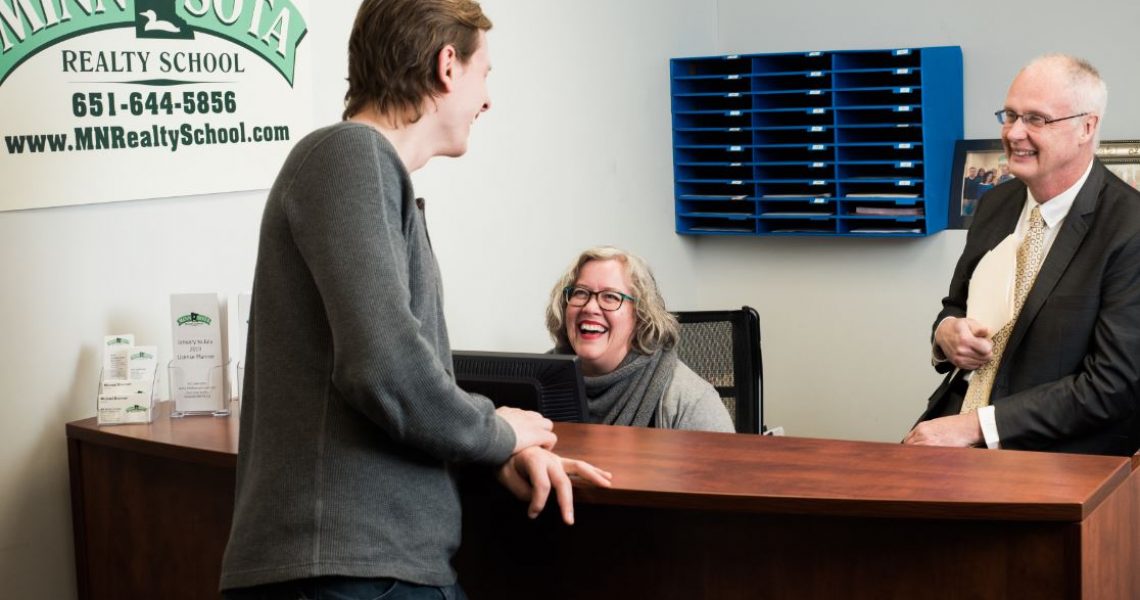 It’s the promise that the Minnesota Realty School makes and keeps.

We’ve all been there. Disappointed by a product, service or overall experience, we fantasize about how we would do it differently. Better. The right way. Usually that’s as far as it goes. Then there’s the rare occasion when someone who has the knowledge, experience and conviction, turns fantasy into reality. Mike Brennan is that guy. An entrepreneur fueled by passion and a sincere desire to improve the industry he’s come to love, Brennan makes things happen.

“We’re turning people into professionals,” says Brennan, the founder and owner of this innovative school. He says this with confidence knowing that the curriculum, staffs and learning experience offered at his school provide students with much more than just the rudimentary basics required to pass the state exam. Having been both a successful REALTOR and broker, Brennan knows that there are myriad details and nuances not found on any exam but invaluable when operating in the real world.

If this wasn’t enough to convince him there was a huge gap in real estate education, Brennan, while operating as a broker/agent, was asked to teach at one of the local real estate schools. Although he tried to augment the curriculum to better prepare his students, there was only so much he could do within the structure of someone else’s institution. After teaching for about nine years, it occurred to him that he was teaching almost full time, and if he were to continue it made more sense to open his own school. Not only would he be working for himself, he would also have the freedom to offer the kind of education that was sorely lacking.

“I believed we needed a learning experience that, when a person leaves our school, they can set up appointments, show the house, write up the paperwork, etc.,” he says. “We’re talking about vocational training.

“Enter a student. Leave an agent.”

“Just to offer an analogy, my son is going through welding school,” Brennan continues. “Theoretically he could sit there as a spectator watching a video on how to weld. Certainly, that’s one way to learn. But the other way, and far superior in my opinion, is ‘let’s get your tail into a welding shop and have you learn by doing.’ That is to say: experiential learning as opposed to spectator learning. I don’t think it’s a secret that most, if not all of us, learn and retain much more by getting in there and actively participating. Active versus passive; there’s just no comparison.”

Not surprisingly, when classes began at the MN Realty School, the curriculum had been meticulously designed, centered on an experiential approach. “We start off with core competencies,” says Brennan. “What are the laws of real estate? What does the standard of conduct require of you? This goes well beyond just being prepared to pass the test or rote memorization. It’s the difference between the ability to recite the alphabet and knowing how to use those letters to form words.”

From there studies extend beyond the classroom. “During the second and third course,” Brennan explains, “we actually go out and look at a house. We show them how to set up appointments. We hand out lockboxes and say, ‘Here’s the code, unlock the door.’ Hence the mantra, ‘You leave as an agent.’”

Unlike many professions, real estate is constantly changing. The most pronounced evidence of this lies in the fact that the forms, which are critical to every transaction, are actually updated every August in the state of Minnesota. Adhering to his goal of producing graduates fully prepared to launch their careers, Brennan knew it was essential to have students learn and practice with the actual, current forms. What was the point of teaching people how to complete a form that might already be obsolete?

“I reached out to our state association of REALTORS for two reasons,” he says. “First, I wanted to make sure that we had a good working relationship with them and second, since they are responsible for creating all these forms, I asked to enter into a copyright agreement with them that would allow us to use the most current, up-to-date forms as they become available. Not only were they quite agreeable to this arrangement, but they expressed surprise indicating that no one had ever approached them about this before.”

Naturally, with forms being updated so frequently, the teachers at MN Realty School remind their students of the possibility of lag time, between graduation and the newest version of these documents. Easily remedied, the school’s policy allows students to return at any time for refreshers of any or all portions of the curriculum for a full year after graduation at no charge.

“We support them through that first year,” says Brennan. “It’s a very tenuous time for them. They’re feeling very vulnerable as they find their way and grow their business. They are welcome to back to review any of the licensing classes as many times as they like during that first year. Many of our students have expressed how this has made a tremendous difference serving as something of a safety net.”

HEAD OF THE CLASS

Brennan’s teaching career was actually born of necessity. As mentioned earlier, he like many other brokers, found it quite frustrating that new agents seemed to arrive at his door with little more than their newly issued license. Certainly, it wasn’t the new agents’ fault their education had been lacking, so found himself assuming the role of teacher and mentor. He was so successful in these endeavors that he was soon approached by one of the biggest real estate schools in the state to teach some of their classes.

It wasn’t long before Brennan had the distinction of being the school’s only teacher who taught both pre-licensing and continuing education classes both in the classroom and online. With his excellent results and the positive comments from students, the school continued adding more and more classes to his schedule, until they had him for at least 40 hours a week. Reaching this juncture, he realized not only were they consuming virtually all of his time, but he wasn’t happy, feeling stifled working within the parameters of the school’s sparse curriculum. Finally, in 2011 Brennan did what so many of us talk about doing and decided to create his own school with a curriculum, presentation and learning experience unlike any other. He began by writing a whole new curriculum.

“My concern was, being in the field, knowing what was in the real world as opposed to the classroom, I wanted to bring in updated data,” he says. “Why would I talk about postcards or antiquated newspaper ads when we have social media? I decided I had to rewrite everything.”

For the next year Brennan dedicated 50 or more hours a week to just this. The end result was fresh, relative and cutting-edge. A curriculum for the 21st century. The old-adage, “give the people what they want, and they’ll come” certainly proved accurate. Opening in May of 2012, Minnesota Realty School has consistently grown, sometimes nearly doubling the number of students from year to year.

Even the growth however was an aspect that Brennan had anticipated and allowed for. “We know that there is a threshold, which if passed exponentially decreases the value or effectiveness of the learning experience. Therefore, we will add classes rather than exceed 40 students to a class. Our competitors have classes that are as large as 100 students.”

This is just one of the many significant differences between MN Realty School and their competitors.

A full-service real estate academy offering not only a comprehensive pre-licensing course Minnesota Realty School also offers one of the most highly recommended school for CE (continuing education).

Naturally, a school is only as good as its instructors, and here again, Minnesota Realty School employees only the very best. “We have a very strong bench of wonderful instructors,” says Brennan, “and are always looking to add those who are of the highest caliber.”

Once a potential teacher is hired, they begin a rigorous six-month process that includes: auditions, auditing classes, taking examinations and more auditions. “We don’t allow anyone to lead a class until we know that are exceptional and meet our admittedly high standards,” says Brennan. “In fact, our last round of hiring began with 14 candidates. At the end of the six-month process, there were only two. Our requirements for our teaching staff are actually much more stringent than those of the state. For instance, the state requires instructors be licensed for at least eight years; we require 10. The state says they must have a high school diploma; we say no, it much be a college degree. We wanted to raise the bar.

“These aren’t just random or arbitrary requirements,” he adds. “I know personally, if I’m paying $250 for a week’s worth of classes I want to know that the person who’s teaching is actually content knowledgeable and is authentic. I really don’t want to sit there and listen to someone who’s reading from a book. That’s why I can state with utter confidence that every one of our instructors is of the highest caliber and share the same goals as we do.”

Never complacent, Brennan is always seeking ways to improve. Always, the objective is provide the finest student experience possible and provide the most pertinent information. When creating a new CE course, they rely heavily on the input from their students or as Brennan says, “We listen to those agents who have their boots on the ground and try to offer what they ask for.”

Currently the school offers about 25 different CE classes from which to choose. One most exciting new additions for 2019 will be a class in negotiations.

“We have partnered with a company called RENI,” says Brennan. “That is, the Real Estate Negotiation Institute. It’s a two-day class-how to become a master negotiator. They’ll receive CE credits as well as the designation of CNE (Certified Negotiations Expert).”

Brennan has the distinction of being the only certified RENI instructor in Minnesota, which means classes such as this can be offered at Minnesota Realty School exclusively.

MAN BEHIND THE DREAM

A native of New York, Brennan has been married to his wife Kari for 26 years. A Minnesota girl, she manages the front desk. “Because of her endearing style we are constantly getting amazing compliments about her,” Brennan says with pride. “It’s not just that she’s so charming and personable, but she’s a great problem-solver and so many students have told me that she was instrumental in their decision to enroll here. We make a great team and have for a quarter of a century.”