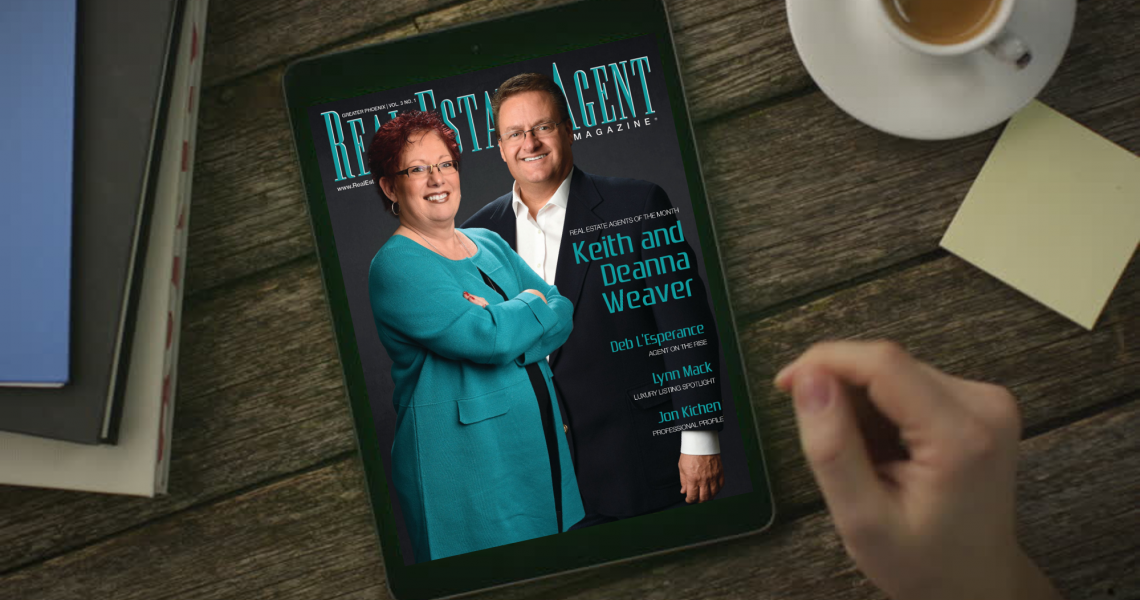 “A match made in heaven,” it’s one of those trite phrases and too often used erroneously. Yet, there are those rare exceptions when it not only suits the couple in question but is really the only way to accurately describe an uncommonly ideal pairing. Such is the case with Keith and Deanna Weaver.

Vibrantly warm and outgoing, they share the kind of personality that makes you feel you’ve just met your new best friends. Smiles are frequent and genuine, and laughter seems to punctuate almost every conversation. “Salt of the earth,” is another cliché, but again, ideally suited in describing this gracious couple. The kind of folks you’d love as next-door neighbors.

Fitting together like puzzle pieces, they complement one another’s skills and talents, each falling into his or her role naturally and effortlessly. And, when they discovered a shared passion for real estate – well, it might just have been the clincher.

“We are very much different personality types,” says Deanna. “To me, Keith seems very competitive. But, it works out great because his strengths aren’t necessarily mine, and visa versa, so together we pretty much have all the bases covered.”

Now married for 15 years, (although they’ve been together longer) the Weaver’s first date was as unique as they are.

“We went to look at model homes,” says Deanna with a chuckle. “Now, at that time, neither of us had ever thought about getting into the business, we just really enjoyed and were fascinated by real estate.”

In fact, it wasn’t until several years later that the career subject came up. “It wasn’t even on our radar,” she says, “until my oldest son went and got his real estate license. He called me one day and said, ‘Mom, you and Keith really need to do this because you love real estate!’”

“That was 16 years ago,” adds Keith. “Best decision we ever made. Of course, there have been highs and lows, but the good far outweighs the bad. You can’t control the market, but you can always control how you respond. We choose to stay positive, work hard and just keep moving forward.”

During those “lows,” particularly in 2010, they looked around trying to decide how to augment their nearly non-existent business when the real estate market came to a virtual standstill. Keith, who is an engineer by trade, had been managing a manufacturing company. But they had jumped into real estate with both feet and weren’t willing to throw in the towel quite yet.

Rather than back away, the couple decided to buy a small, local real estate company in Litchfield Park.The company’s primary source of income was property management, which the Weavers thought might be a way to survive the market slump.

“We bought the company from an elderly couple who did everything ‘old school’,” says Deanna. “They actually had a ledger! So, it took me a couple of years to really get comfortable with the business and get our systems modernized. One day, I guess you could say I had a bit of a meltdown and said, ‘I don’t want to do property management anymore.’”

“Actually, it was a bit more dramatic than that,” Keith interjects with a teasing smile.

Keith’s father, also a real estate agent, took over the property management division while the Weavers set about searching for the right brand that would fit the vision they had for their own real estate business. They knew what they wanted – technology and a competent group of talented agents.

“Our vision included a situation where we could help our agents grow,” says Deanna. “We wanted a houseful of really good agents. So, we began to shop around. To be honest, we were quickly discouraged by what we were hearing; things like, ‘Don’t worry it’s not about real estate. National statistics say only 20 percent of agents are going to do more than two deals a year, so just charge them for everything.’ What we took from that was basically that we are nothing more than a profit center and who cares about whether or not the agents succeed? It made us feel so sad about this industry that we love.”

Thoroughly disheartened, they were sitting in their office one day when serendipity came knocking on their door.Their back door to be precise. It was a gentleman with a card that read: “Earn more than 100 percent, ask me how.”

As it turned out, the man who had appeared almost by magic had an EXIT Realty franchise right in the same complex as the Weavers. Intrigued they talked to him for a long time and then followed up with thorough research. The more they investigated the more they wanted to know. At long last, it seemed their search was over, and the vision they had nearly given up on, now seemed within reach.

“The more we looked and researched the more we knew in our hearts that this was it, that intangible something that we couldn’t quite put a name to but recognized immediately,” says Deanna. “It’s a real estate company by design. Within a couple of months, we negotiated and purchased his EXIT Realty franchise.”

“The very first words we heard from EXIT Realty were, ‘Let’s give you the tools to help make your agents successful’,” Deanna says. “It was like the lights went on. It was truly that aha moment. Five months later, we went to their broker/owner training, and within the first two minutes Steve Morris, the founder and chairman of EXIT International, came out and just talked. And, he didn’t talk about real estate. He talked about getting your mind right.”

“I literally poked Keith with my elbow and said, ‘This is what we were waiting for, this is why we joined this company,’” says Deanna. “It’s amazing, how far you can go, when you surround yourself with people who have a positive attitude and when you need help they reach out their hand.”

Pumped up with new knowledge, friends and the winning attitude they had just experienced during their first broker/ owner training, the Weavers plunged full-steam ahead. Immediately putting into action everything they had garnered; the couple quickly grew their business in Litch field Park.

“The technology EXIT International provides is phenomenal,” says Keith. “The tech staff is the best of the best. EXIT Realty employs tech geniuses that not only listen to what we need but focus on the humans behind the device so we’re in the very best hands.”

The Weavers were so successful building their newly branded business, that they soon had two locations; one serving the east side of the valley and the other the west. Their expertise and groundswell of attention they achieved did not go unnoticed by those at the top.

Tami Bonnell, who spearheads EXIT’s growth is the company’s veteran CEO. According to Bonnell, “Keith and Deanna have demonstrated great leadership in their roles as EXIT franchisees and are expanding their vision to help others build great brokerages and attract top quality real estate professionals.”

“We love doing real estate again,” says Deanna. “Because now, we actually have the training, branding, technology, culture and a model where agents build a business within their business. A business that adds additional income with retirement and beneficiary benefits. With a vested interest in the company we all care and support each other much like a family does.”

“We found where we need to be,” Keith agrees.

Their efforts, attitude and accomplishments were so impressive that when the regional owner wanted to retire, the Weavers stepped forward and were warmly embraced and encouraged to assume that role.

“In October, we were named regional owners of EXIT Realty Arizona,” Deanna says with pride. “We want to grow EXIT Realty throughout the state of Arizona.”

“So, we’re looking to expand,” adds Keith, “selling franchises and moving forward. Right now, it looks like we’re helping to open offices in Prescott Valley, North Phoenix and Tucson. It’s all very exciting. Our vision includes 50 offices statewide with over 1,500 producing agents by 2023.”

For two people whose first date was checking out model homes, this seems like the “happily ever after” ending to their story. However, this is not the ending, only the beginning.