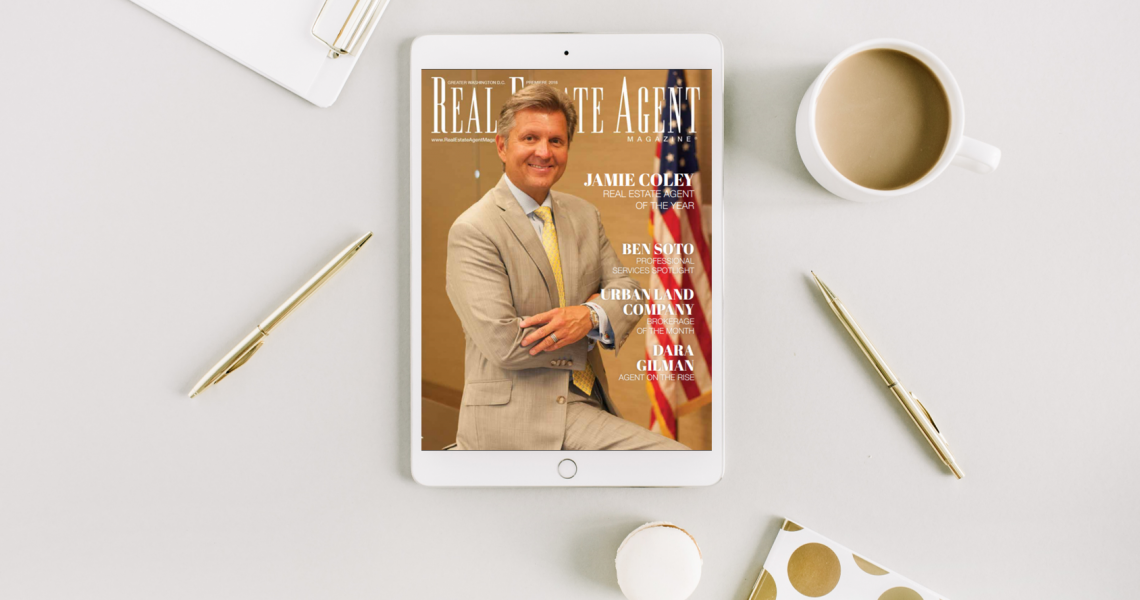 Third-generation Washingtonian Jamie Coley, speaks with pride of a family tree whose branches stretch halfway around the world. “I grew up in Maryland, and have lived throughout Maryland, Virginia and D.C.,” he says. “My mother was born and raised here as well, but my grandfather moved here from the Philippines (probably with the army), then met and married a Polish woman in Baltimore.”

Whether it can be attributed to this colorful and multicultural heritage or his own personal drive, Coley has always pushed himself.

“I was a classic overachiever,” he says with a self-deprecating laugh. “In high school, I was involved with student government, senior class president, and voted most likely to succeed.”

Today, this same drive is evident in everything he does. This includes building a successful real estate business and considered one of the primary rainmakers in his team. At the same time, he’s heavily involved in various industry organizations. This past year has been particularly busy as the Greater Capital Area Association of REALTORS® (GCAAR) 2017 president.

The 2017 position comes with it the added responsibilities of serving on the board of directors for the State Board of Maryland REALTORS®, the DC Association of REALTORS® and for NAR.

“For nearly 29 years, I was oblivious to the important work these associations do,” says Coley. “I was busy building my own business, head down, shoulder to the grindstone. It wasn’t until about seven or eight years ago when the current president tapped me to become more involved.”

Coley’s first contribution was serving on the grievance committee, which led to one committee or assignment after another. Over the years, his hard work and contributions did not go unnoticed, and he was asked to take on increasingly greater responsibilities.

“It wasn’t until I really became involved that I began to fully appreciate all the hard work and significant changes these organizations are responsible for,” he says. “Prior to becoming involved, I just assumed I didn’t have the time or experience. That’s not true. We all can make the time if we feel it’s something that’s important, and for me, this is very important. It’s our livelihood.

“I tell people,” he adds, “that if I can invest the time I do to these various committees, boards, events and other functions and still continue to build a successful business, then anyone can.”

Much of Coley’s involvement has to do with meeting with lawmakers and discussing issues important and relevant to the real estate industry.

“We have worked on issues of local and national significance. Last year we were very involved in protecting the interests of homeowners in the federal tax reform debate. This year we are focusing on interviews and endorsements for Montgomery County Council and Executive candidates. In the District, we have been very aggressive in reforming TOPA (“Tenant Opportunity Purchase Act”) to help with the sale process for single family homes.”

“As REALTORS® we all have a responsibility to get the word out and contact our local representatives to make sure this doesn’t happen. Take away such a key motivation to home buying and you’ll be amazed at how many people, particularly millennials, will simply continue to rent.”

SHOULDER TO THE GRINDSTONE

Coley has always been involved and driven. Even as he continued his studies at the University of Maryland, first in pre-med and then later switching to business management, he not only garnered top grades but also worked at a physically challenging job with Northwest Airlines.

“I had goals right out of the gate,” he says. “I ended up working for Northwest Airlines for almost nine years. Nothing glamorous. I worked in what’s known as equipment service, so I worked outside, parking the planes, unloading them, dealing with mail bags and freight. But it did give me an opportunity to travel, which was wonderful. That in turn gave me an introduction to the fact that there’s a big world out there. I’ve been very fortunate.

“Of course, when I left the airlines and began my real estate career, I thought my parents were going to disown me because they could no longer travel for free, but they didn’t,” he adds with a chuckle.

Working full time while going to school allowed Coley a little financial freedom, so at the age of just 21 he made the momentous decision to purchase a home. A big step for a single young man. According to Coley, this was life-altering in another respect; it was the single event that triggered his decision to go into real estate.

“It’s like a light bulb went off for me when buying my first home so young,” he says. “I had the money but not the experience. Really, I was young and dumb. Looking back from a more experienced place in my real estate career, it amazes me what I didn’t know back then. The thing is, I don’t think that’s unusual. Over the years I’ve discovered that most people, regardless of their age, are just as naïve and uninformed as I was when they purchase their first home.”

This important revelation has impacted the kind of real estate agent Coley strives to be. “Buying my home, I worked with a very nice, very pleasant agent,” he says, says. “But she never really taught me anything about the process or what I feel I needed to know. So, that gave me the foundation to say, ‘If I ever get into this business I don’t ever want any of my clients to feel how I felt, which was totally in the dark.’ It’s something I have really taken to heart. I make sure my clients know that there are no dumb questions. I want them to feel comfortable asking anything, but I believe it’s my job to make sure they are as informed and educated about the homebuying process as possible. No one should ever feel confused or lost when making one of the most substantial and important purchases of their life.”

It’s a philosophy that has served Coley well. His clients turn to him before and aft er the sale with questions about their purchase, the market or anything else pertinent. Because he makes them feel so comfortable, clients oft en become lifelong friends and turn to Coley for information they don’t trust getting from any other source.

“So, here I am in the real estate business,” Coley recalls, “and to be honest, especially in the beginning, it was a bit of a roller-coaster ride. But, by about 1996, my business had really begun to take off. All the groundwork I’d put so much time and effort establishing, was starting to pay off. The old adage, ‘What goes around comes around,’ seemed to be coming to fruition. Previous clients were coming back for their second or third transaction, referrals were seemingly multiplying daily, so I made a few business decisions to facilitate my continued growth.”

The results were virtually immediate and decidedly long-lasting. His previously healthy business suddenly exploded. Having wisely put the right systems and people in place, Coley was able to handle the sudden and continued growth, never once sacrificing quality for quantity.

Even a Type A, overachiever such as Coley recognizes when the workload is too great for one person. He hired an assistant and then a buyer’s agent. “I even hired a team coach just to help get me more organized,” he says. “I was so busy, going in so many directions at once, that I needed help guiding my staff and getting systems into place.”

Not surprisingly, Coley is also something of a perfectionist, particularly when it comes to catering to his clients. While it requires more time and energy, this trait has helped foster his reputation for peerless service. From beginning to end, he’s always cognizant of his client’s concerns. His goal to make the real estate process less of a mystery by educating clients every step of the way. Once again, Coley draws upon his own early experiences in real estate to help him better understand his clients and anticipate what will help them through this sometimes confusing process.

“A person’s first experience in real estate can be quite daunting,” says Coley. “I know how that feels and never want a client of mine to feel lost, or even worse, afraid to ask a question.”

These are not just words or empty promises. When selling, Coley maintains a solid standard of accurate pricing, creative marketing and maximum networking utilizing his highly developed and extensive agent network. As a certified buyer’s broker, Coley effectively serves his clients by internalizing the purchaser’s needs in locating their ideal home. Not only does he take into consideration the buyer’s financial capabilities, but really listens to their desires, notes their lifestyle and any impending changes as well as helping them anticipate any future needs.

From the outset Coley has treated his business as a business. Fully committed, 100 percent invested, when it came time to choose which company with which to be affiliated, his decision was careful and precise. One of these astute determinations came in 2000, when he joined forces with another very successful real estate agent in the office.

“Leigh Reed and I knew and respected one another,” says Coley. “We seemed to have similar philosophies about business and in particular, customer service. So, when one of us would go on vacation we’d ask the other to cover.”

Observing this simpatico relationship, Coley’s assistant one day made a very wise and timely suggestion. “She said, ‘You guys should just partner up,’” Coley recalls. “Now, back in 2000, the idea of teams wasn’t as common a practice as it is now. And yet … another light bulb! It made perfect sense. And, as they say, the rest is history. For the past 18 years we’ve worked together and grown our business dramatically.

“Leigh and I have a very unique situation,” says Coley, “we not only work extremely well with one another, but our strengths and weaknesses are such that they complement one another.

“Partnering up with Leigh has proven to be one of the best decisions I’ve ever made,” he continues. “Together, we’ve built an incredible team that operates like a well-oiled machine. Nothing falls through the cracks. And, as if that weren’t enough of a dynamic advancement, in 2016 our duo became a trio when we merged with Zelda Heller. Zelda is a legend herself, so you can imagine how powerful we are with our combined forces. We now total about 16 team members, all of us in sync, in tune and imbued with integrity. The transition has been seamless; the camaraderie and synergy are phenomenal. Not only has our business continued to grow but so has our combined and individual reputations.”

Needless to say, both individually and as a group, these professionals have earned numerous awards and recognitions, including being named the No. 58 team in 2016 in the entire nation.

“While we are certainly very proud of our success and various accolades, including being named Top Producers and Best Agents, what really means the most to us, is knowing that we have earned the trust and respect of our clients and other agents,” Coley says.

Enjoying the fruits of his labor – sowing the seeds of honesty, hard work and dependability planted so many years ago, today Coley is working with the children of the client’s he assisted when just launching his real estate business. A lot has changed over the ensuing years, but one thing that remains constant is Coley’s belief in the golden rule – always treating others with the respect and kindness. Sharing the same consideration he would like others to bestow upon himself and those he loves.