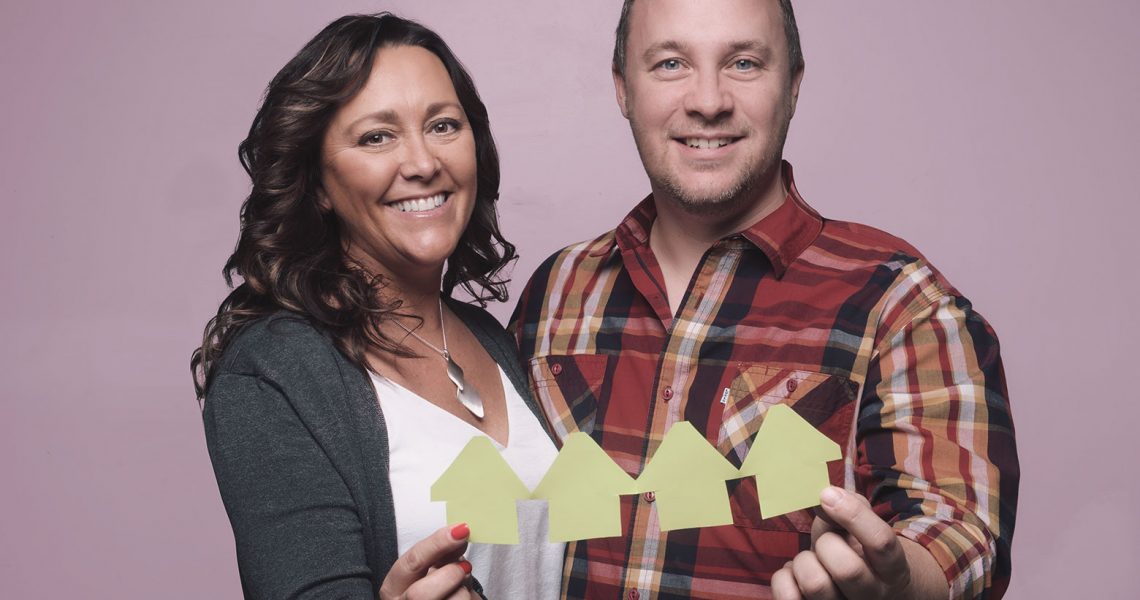 Heather & Paul Konsor: Family First in Life and in Business

Family. It’s a word easily (and frequently) bandied about by those in business, especially those in the real estate business. Perhaps because it evokes the very best of hearth and home, even suggesting that a professional has a special edge. But when it comes to both real estate and family, you’d be hard pressed to find anyone who knows or appreciates either as much as the husband and wife team of Paul and Heather Konsor aka The Konsor Group.

As managers of a Berkshire Hathaway HomeServices North Properties in Monticello, Minnesota, this incomparable pair have been demonstrating their unique brand of magic through sincere involvement with their clients, incomparable expertise and knowledge, all the while raising a very large loving family.

Oh, did we mention they are the parents of six children? As if any further proof were required, the Konsors have been voted Best Real Estate Agents by the readers of the Monticello Times five years running. With their track record, that’s really not surprising.

And, they have at least as many professional awards as they do offspring. This is one dynamic duo who takes both their business and family very seriously. That sincerity and commitment are clearly evident in everything they do.

It’s a real life story that’s so romantic, it’s almost hard to believe. Paul and Heather, who both grew up in St. Cloud, have known one another virtually their whole lives.

“Our parents were great friends,” Heather explains. “I’m actually older than Paul and used to babysit him and his two older brothers. The two families were very close, and every year would take a camping trip together.”

Of course, as children do, Paul and Heather grew up and began their adult lives. For her part, Heather was married, had children and then, several years later, found herself a single parent. That all changed when she and her brood make the trek for the annual two-family camping trip. She and Paul, who also had just come out of a relationship, reconnected and the rest is history.

During those intervening years, while Heather was staying busy with raising children, staying active in the community and trying to stay afloat, Paul had jumped into the real estate business with both feet.

“I was just 19 when I became involved in the business,” Paul explains. “Of course, it was on the mortgage and finance side. Eventually I ended up opening my own mortgage company with a partner, and then opened up a real estate division of that same company. I transitioned from being a loan officer into a REALTOR® and I just loved being out with people rather than being stuck behind a desk crunching numbers all day.”

For Heather, the move not only to real estate but working outside the home came a little later.

“I had always been a stay-at-home mom,” she says. “When our youngest started first grade, all the kids were then in school full time, so I felt like it was time for me to pursue something beyond kids and carpools.

Their Berkshire-Hathaway office is one of the busiest in the state. Now with 11 fulltime agents, the couple say that while they certainly plan on continuing to grow, they are rather particular about who they bring on board.

“Obviously we’d like to continue to grow the office, but we have a very special family-like culture and want to preserve that,” Paul explains.

“We’d rather have people who can join our family and whom we can help to build their own business and be successful rather than just add bodies for the sake of growing.”

When they refer to a family-like atmosphere, it’s more than just the warmth and camaraderie that’s quickly evident. Both Paul and Heather take a sincere interest in each member of their team and are committed to helping them not only learn the ropes but be successful. It’s an arrangement that’s obviously working too. Every year the BerkshireHathaway franchise presents the Rookie of the Year award and for the past two years, that winner came from their office.

“It’s kind of fun,” says Paul, “we’re able to take agents on and they’ve succeeded to the point where they get that kind of recognition. Again, that’s why, rather than be a big, huge office, we’d rather have the time to invest in all of our people. We never want to lose that personalize, one-on-one relationship.”

Heather’s eyes fairly sparkle when describing her favorite part of the business, “I love working with first-time homebuyers. I love watching them get excited about each step of the whole process and enjoying each milestone. I especially love seeing the look on their faces on closing day when I hand over the keys to their very first home.”

On the flipside, a large portion of her business is working with relocations and Heather confesses this particular area of real estate comes with its own built-in challenges.

“The seller and/or buyer might be in another state and so much of the interactions have to be conducted by phone, texts, live video or what have you. It’s just always better when you can work with someone face-to-face.”

Paul’s favorite aspect of the business is working with families. “We kind of understand that whole family dynamic,” he says with a smile. “Because we’ve gone through all the different stages and ages we can understand and appreciate those times when maybe one or all of the kids aren’t completely thrilled about moving away from their old school and friends. You know those tantrums or attitudes teenagers are famous for? Well, sometimes our clients are initially embarrassed when their kid is acting up. But we’re quick to reassure, you know, hey we’ve got kids, we’ve gone through all that too. We get it. In a way, you have to be part therapist in this business because it is a very emotional time. Let’s face it, moving your family can be stressful and Heather and I get that.”

In fact, the Konsors are so cognizant of just how important it is to include children in the buying process that they’ve actually created a special Kid Contract that not only encourages youngsters to help mom and dad by keeping their rooms tidy and ready for potential buyers but rewards them when the house sells with a gift card to a place of their choice.

It’s apparent that this professional couple and their team are very special. It’s more than just the fact that they have experience and engaging personalities. So, what is that something special that truly sets the Konsors apart?

Actually, it’s not one, single thing. For example, the Konsor family are longtime residents of Monticello and truly believe in and support their community.

Paul not only has intimate knowledge of the “lay of the land” through his work in real estate, but also because he serves on the city’s planning commission. A position and responsibility he takes quite seriously.

“I also think people like to work with people who are real,” Paul interjects. “When they meet us, our clients know we understand about families and all the stress, complexities and emotions that surround moving. That’s also why we’re not suit-and-tie kind of people. We’re not trying to impress anyone with fancy clothes, we just want them to know they’re in good hands and can trust us to work hard for them.”

“Seriously,” adds Heather, “if I showed up in a dress and high heels to show a home, I think it would make most of my buyers uncomfortable.”

Another important aspect of their team dynamics is the fact that both as a married couple and as business partners each recognizes, respects and relies on the other’s strengths.

“Although I’d say we are both out-going, I’m definitely the more gregarious,” says Heather. I can and do talk to anybody. I get that from my mom. But I love meeting new people and connecting. Paul is incredible at the stuff that I really don’t like. You know, the behind the scenes stuff like research, contracts, marketing. He has a very analytical mind and is extremely detail oriented.”

A warm, funny and engaging couple. We thought it would be fun to ask: If you weren’t a real estate agent, what would you like to do?

Heather’s answer came quickly and was obviously well thought out. “I’d write a book! I’ve had a very interesting and complicated life and my friends who know my story are always telling me I should write a book. I still might, but if I couldn’t sell real estate for whatever reason I think I’d get to work writing fulltime.”

Paul’s response comes a bit slower as he first qualifies, “Well, if money wasn’t a concern, you know all the bills were paid, I would love to be a fisherman. Or maybe a fishing guide. I don’t really play or watch any other sport so yeah, that’s what I’d do.”

Thankfully for the homebuyers and sellers of Wright County and surrounding areas, Paul and Heather Konsor are 100 percent dedicated to them, their own family and their community.