Be a Financial Planning Hero

As a real estate agent, you are a home buying guide, a researcher, a marketing department, and a negotiator all wrapped into one package. Did you know you can also be a financial advisor and by extension, a hero?

Financial planning isn’t easy and real estate professionals are involved in their clients’ lives often at precisely the time they need to be most careful about their money. Buying a home is a big purchase decision, which requires a well thought out strategy before, during and after the buying process. However, as we all know, sometimes the unexpected can throw even the best laid plans completely off course. There are safeguards against even the most abrupt surprises and it’s up to you to tell buyers about it. What exactly is said protection? A home warranty.

Think about all the expenses the average American worries about on a daily basis. For millennials and first-time homebuyers, the most obvious is student loans. According to Student Loan Hero, recent graduates have an average student loan debt of over $37,000. That’s the sort of loan that takes many years to pay off and it is almost always on graduates’ minds. Then, there’s retirement savings to think about. That’s an issue that faces baby boomers, millennials and everyone inbetween. In fact, there are some who say the U.S. is in the midst of a retirement saving crisis.

The slow crawl of wage increases means that most people can’t look to a salary raise as a solution. The majority of Americans have to work with what they already have or seek assistance from their family. Take all this into consideration, and it may come as no surprise that two-thirds of Americans believe they would have trouble coming up with the money to cover a $1,000 emergency. No matter the income bracket, scraping together this much cash would be difficult for many families, according to a poll conducted by The Associated Press-NORC Center for Public Affairs Research. Here’s a breakdown of how many families in three income categories would have trouble coming up with $1,000 in a pinch:

In fact, for many people, putting together even $400 to cover an emergency is a difficult task. The Federal Reserve’s most recent
“Survey of Household Economics and Decisionmaking” found that to cover a $400 emergency, 46 percent of households would have to either borrow money or sell something.

HOW REAL ESTATE AGENTS CAN HELP CLIENTS PROTECT THEIR FINANCES

Through no fault of their own, considering the entire fiscal responsibilities Americans have these days, chances are your clients could use some financial planning advice. A truly distressing aspect of homeownership is when major home systems and appliances breakdown. An unpredictable failure of a refrigerator or heating system shortly after someone buys a home isn’t exactly out of the question – in fact, in many cases it may be likely.

It’s not uncommon for major appliances to begin failing after two to five years. With older systems this wasn’t the case as they had a longer life span. However, the more high-tech appliances are, the more components and processors there are, each with a chance of breaking down.
People can watch a superhero in a movie at a theater or on TV. However, with money tight and financial emergencies often unpredictable, where do they turn for real-life heroics? Make sure it is you, a real estate agent armed with an exceptional power: the home warranty.

A home warranty is exactly what homeowners need to cover the cost of an unexpected issue, such as a major system or appliance breakdown. With all the financial concerns a new homeowner faces, they shouldn’t have to deal with repairs and replacements. By suggesting home warranties to clients before closing, real estate agents can serve as a financial planning hero. Your former buyers will deeply appreciate the advice, especially if they do end up having to cover the cost of a full or partial system or appliance breakdown. Don’t let your clients go into homeownership alone. Now, they may need a hero more than ever. Have a home warranty provide protection for major systems and appliances. Jennifer Gagne 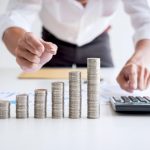 Be a Financial Planning Hero